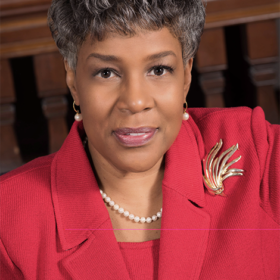 Mrs. Staples received her B.S. from Syracuse University and her M.S. Ed. from Canisius College. She started her career as a fourth-grade teacher at St. Columba School, then as a counselor for Transitional Services. Later, she worked with the employment and training division within the Clarkson Center (formerly Allentown Youth Services).

Mrs. Staples is the former Chief Executive Officer of the YWCA of Western New York, Buffalo’s oldest and largest organization for women, whose mission is the empowerment of women and girls and elimination of racism. During her tenure, the YWCA of Western New York launched several new initiatives, provided transitional housing for women and educational opportunities for children.

Upon leaving city government, Mrs. Staples joined M&T Bank/Westminster Foundation as Director of Community Affairs for Buffalo Promise Neighborhood. Based on a collective impact model, Mrs. Staples convened diverse stakeholders to create strategies to enhance the quality of life of residents within the 14215 zip code. Her successful results led to her promotion to a Vice President of M&T Bank.

Currently Mrs. Staples is the Director of Community School initiatives for Say Yes Buffalo, a partnership created to strengthen the Western New York economy by investing in the education of Buffalo’s future workforce. In her role, Mrs. Staples oversees strategies to help enhance academic achievements of students in the City of Buffalo.

Mrs. Staple is a native resident in the city of Buffalo with her husband, Jonathan and their two daughters, Cydney and Taylor. Tanya’s strength, perseverance, and passion are attributed to her spiritual foundation. She is a member of First Shiloh Baptist Church where her husband is Senior Pastor.  Her faith inspires her in the verse, “to whom much is given, much will be required.”

Amanda Paul is Senior Director of School-Based Services. She can be reached at [email protected] and at 716-468-0043.

Sylvia Lloyd is the Director of Preventive Services.

Tommy McClam is the Senior Director of Boys and Men of Color.

Daphne Ross is the Senior Director for College Success and Communications at Say Yes Buffalo.

Emily Wyckoff is the Senior Director for Development and Strategic Partnership at Say Yes Buffalo.