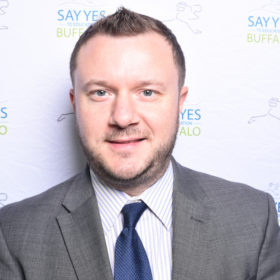 Building a movement to fundamentally transform the climate around education in his hometown is what attracted David Rust to lead Say to Education’s work in Buffalo.

Since accepting the post almost eight years ago, he has steadily built a coalition of staff and partners focused on fulfilling one of the most significant community renewal efforts undertaken in the region’s history. Through the promise of a free-tuition scholarship program, Say Yes Buffalo scholars are eligible to attend more than 150 private and public institutions, including Harvard, Columbia, Notre Dame, Northwestern, and the University at Buffalo, as well as many two-year community colleges, trade schools, and certificate programs.

However, the transformative work that Mr. Rust is interested in couldn’t be limited to a narrow metric of educational success. A believer in a community’s ability to unite in order to collectively solve its greatest challenges, Mr. Rust’s work has challenged Buffalo to live up to its nickname as the City of Good Neighbors. In order to address the generational and systemic issues which face our students, Mr. Rust has recruited and then empowered a dedicated and talented staff and built a coalition of public- and public-sector partners. Under his leadership, Say Yes Buffalo has grown into an economic development engine and a best-in-class non-profit organization that serves as a national educational partnership model.

Selected accomplishments from the Say Yes Buffalo coalition that Mr. Rust has helped build include:

• Providing tuition scholarships to 1,096 scholars who have already completed academic programs and launching a Say Yes Forever $100 million endowment campaign to fund the scholarships in perpetuity.

• Contributing to double-digit increases in the number of Buffalo public or charter school graduates completing the FAFSA and applying to at least one college by coordinating with higher education and district partners.

• Fostering an environment of collaboration and responsibility that has brought together an array of groups such as the teachers’ union, district administration, city and county governments, business, community and faith leaders, district parents, higher education, and private philanthropy.

• Building Say Yes Buffalo into a dynamic and leading non-profit with a staff of over 100 people, of whom 68% are people of color, serving in nearly a dozen different roles that offer supports to Buffalo children from cradle to career and every step along the way.

Prior to joining Say Yes Buffalo, Mr. Rust served as Deputy Commissioner for Youth Services/Social Services for Erie County where he managed a staff of 120 with a $14 million budget, with a primary focus on juvenile detention and diversion services, runaway/homeless youth services, and funding community-based, positive programs for youth. He also served the Department of Social Services on numerous interdepartmental projects with county agencies such as Family Court, Mental Health, Probation, and numerous community-based collaborations for youth.

He is a graduate of St. Bonaventure University where he earned both a Bachelor’s and Master’s degree in Business Administration Marketing/Management from the Russell J. Jandoli School of Journalism and Mass Communication.

Amanda Paul is Senior Director of School-Based Services. She can be reached at [email protected] and at 716-468-0043.

Sylvia Lloyd is the Director of Preventive Services.

Tommy McClam is the Senior Director of Boys and Men of Color.

Daphne Ross is the Senior Director for College Success and Communications at Say Yes Buffalo.

Emily Wyckoff is the Senior Director for Development and Strategic Partnership at Say Yes Buffalo.