Say Yes Breaking Barriers Knitting “Fabric of this Community,” One Young Life at a Time 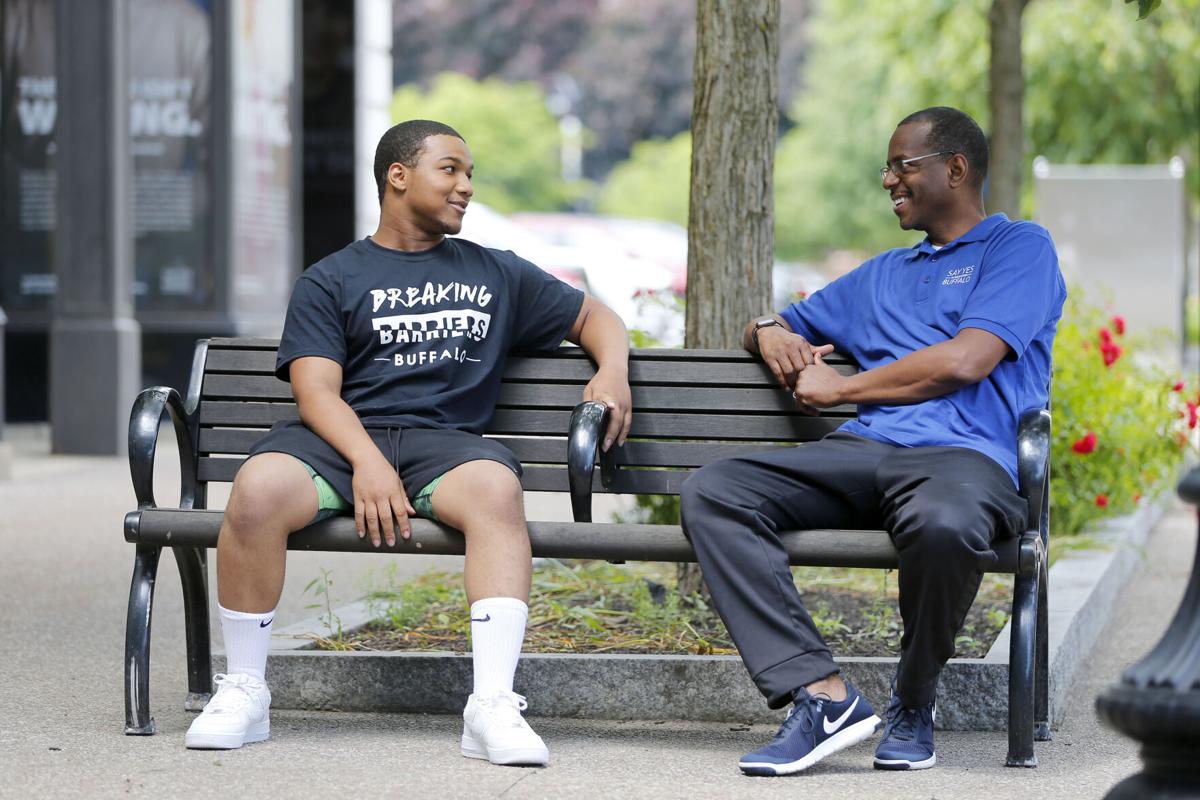 Several times a week, on his way to work at a Valu Home Center in Amherst, 17-year-old Shawn Collins finds himself with some extra time at a bus stop at Bailey and Walden avenues.

Like clockwork, he settles in for a group text with close friends Dwayne Sawyer and Jordan Jackson, both 19. The texts might veer quickly from debate on favorite teams in the NFL’s pandemic season into a discussion of, say, plans by Collins, a South Park High School graduate, to attend SUNY Buffalo State in the spring.

What seems casual, they all agree, holds greater meaning.

“It’s what makes us grow, what gets us out of our shells,” Sawyer said.

The teenagers met in Breaking Barriers, a program inspired by the Greater Buffalo Racial Equity Roundtable, coordinated by Say Yes Buffalo and part of the national My Brother’s Keeper Alliance. Even in a time of virus-created distancing, the goal is respite from more damaging forms of isolation.

Coordinators Tommy McClam and Daniel Robertson already know what about 35 young men will be discussing in Tuesday’s Zoom meeting. Many saw video footage from Friday of two angry men in Buffalo, one who drew a knife from his pocket, screaming ugly racial epithets on Hertel Avenue while trying to block marchers on the 57th anniversary of the March on Washington, five days after Jacob Blake was critically wounded in a Wisconsin police shooting. One 47-year-old man, still unnamed, was charged Tuesday with menacing and two other counts by Buffalo police.

Couple all of it, McClam said, with uncertainties from the pandemic and the passing Saturday of Buffalo basketball legend Cliff Robinson and Friday’s unexpected death of Chadwick Boseman, an African-American actor whose empathetic and compelling nature in many films, especially “Black Panther,” brought love and respect from countless kids who grew up watching him.

As Collins told McClam on Sunday in a kind of collective statement:

McClam, long ago, earned that trust. Removed from one high school for fighting a few years ago, Collins said he was at a crossroads “where everything made me angry, where I didn’t care about anything.”

He expected little when directed into Breaking Barriers, another effort he guessed would be a quick in-and-out.

Instead, he said, it was transformative. Collins ended up as a co-captain on last year’s South Park High School football team. Through Breaking Barriers, he met now-retired Buffalo Bills linebacker Lorenzo Alexander, leading to a “distanced” Bills internship as part of the NFL’s Inspire Change Initiative. Collins sees it as a direct bridge to the philosophy shared by McClam and Robertson.

“The only way to change the fabric of this community is a citywide approach,” said McClam, senior director of the Say Yes boys and men of color initiative. “The I’m-going-to-be-a-mentor-for-one-year approach doesn’t work, especially for young men missing the assets they need in life. This is all about time, about long-term relationships.”

This moment, he said, is especially volatile. Maki Becker of The Buffalo News has reported on how gun violence in Buffalo rose by 54% for the first half of 2020. Considering the dangers McClam witnessed in his own youth, he says one priority rises above all others for young men he mentors.

“I haven’t been to a single funeral,” McClam said, “and I don’t want there to be a first one.”

Now 63, McClam built a career with the Internal Revenue Service, while never forgetting his own childhood struggles, particularly the day a friend died in a shooting. The teenage McClam was thinking about vengeance when he ran into Audley McLean, a minister and businessman McClam still sees as a mentor.

McLean, now 88, sensed all the grief and anger, and something in that understanding caused McClam to heed his advice:

“He’s a marvelous man, a God-developed man who bears it humbly,” said McLean of McClam, who left the IRS to become a youth pastor, later serving as director of the YouthBuild USA National Mentoring Alliance. McClam had returned to social justice work in Buffalo when he received a call four years ago from David Rust, executive director of Say Yes Buffalo.

The racial equity roundtable had a vision for a mentoring program for young men, and Rust knew the right guy to lead it.

“You couldn’t find a better person, a more perfect fit, than Tommy,” he said. “He’s kind, he’s a great listener, and he’s an inspiration to countless people in Buffalo.”

Robertson, 35, who describes Breaking Barriers “as a movement, not a program,” shaped his approach on what he learned from McClam. “Like a lot of the young men in Breaking Barriers, I didn’t have my father while I was coming up, and I was angry,” Robertson said. “He’s been like a father to me and a grandfather to my daughter.”

The majority of participants are of high school age. Before the pandemic, they met every Saturday at the Bennett School of Innovative Technology, gathering for service projects during the week. Covid-19 caused a shift into regular Zoom calls, where the teens shape the conversation.

Their ongoing challenge, McClam said, is finding the quiet courage to express uncertainty about everyday fears and obstacles, with this confidence:

Any response will involve understanding and support.

For Collins, the breakthrough occurred on an excursion to the National Museum of African-American History and Culture in Washington, D.C. He remembers sitting in a hotel room with guys who felt like strangers, saying as little as possible, when Sawyer and Jackson noticed his silence.

“We decided we had to make him talk,” said Sawyer, who had been in the same place. When he joined Breaking Barriers, his grandmother was seriously ill and he thought he carried that worry alone. “Emotionally and physically, I felt lost,” he said, hardly believing what he first saw as another after-school initiative could help in coping with that pain.

“I started to lean into the group,” he said, “and they were always there for me.”

As for Jackson, he and Sawyer used the same warm persistence they learned from McClam when Collins tried to keep his distance in Washington.

“You reach a place,” Collins said of teens who are now his closest friends, “where you know you can put your faith in them, where you can trust them with your secrets.”

McClam said the young men have spent hours talking about the Black Lives Matter movement, and he knows the video of angry adults screaming racial insults in Buffalo will come up today, a direct affront to these teenagers who have worked so hard.

“If you don’t have those conversations,” McClam said, “it’s a lot easier for anger and frustration to push through in other ways.”

He and Robertson provide a multitude of outlets. Sawyer spoke with passion of a Breaking Barriers podcast that McClam calls “a mirror of their narratives.” During the pandemic, members help with many acts of service. Those who commit themselves for long enough, McClam said, receive a Breaking Barriers jacket as a statement on life “as something larger than yourself.”

The group’s creed, read at every meeting’s end, always concludes with the same words. “We are our brother’s keepers.”

A few weeks ago, Collins, Sawyer and Jackson helped in toting food during a “Groceries to Seniors” initiative coordinated by The Journey Church, and held at Manna@Northland. When they finished, the teens settled at a table to talk about a little of everything. McClam leaned back, taking in their burst of observations.

Once they stood to leave, McClam — who had promised Collins a ride to work — trailed behind the young men, who walked shoulder to shoulder. As a parting question, I asked McClam if any one thing always draws him back.

“I love these guys,” he responded in a low voice, as if somehow they did not know it.

Sean Kirst is a columnist with The Buffalo News. Email him at skirst@buffnews.com.